Alzheimer’s disease (AD) is one of the cognitive or memory-related impairments occurring with advancing age. Since its exact mechanism is not known, the full therapy has still not been found. Acetylcholinesterase (AChE) has been reported to be a viable therapeutic target for the treatment of AD and other dementias. To this end, acetylcholinesterase inhibitors (AChEIs) are commonly used. AChE is a member of the hydrolase enzyme family. A hydrolase is an enzyme that catalyzes the hydrolysis of a chemical bond. AChE is useful for the development of novel and mechanism-based inhibitors. It has a role in the breakdown of acetylcholine (ACh) neurotransmitters, such as acetylcholinemediated neurotransmission. AChEIs are the most effective approaches to treat AD. AChE hydrolyzes ACh to acetate and choline, as an important neurotransmitter substance. Recently, Gülçin and his group explored new AChEIs. The most suggested mechanism for AD is the deficiency of ACh, which is an important neurotransmitter. In this regard, AChEIs are commonly used for the symptomatic treatment of AD. They act in different ways, such as by inhibiting AChE, protecting cells from free radical toxicity and β-amyloid-induced injury or inhibiting the release of cytokines from microglia and monocytes. This review focuses on the role of AChEIs in AD using commonly available drugs. Also, the aim of this review is to research and discuss the role of AChEIs in AD using commonly available drugs. Therefore, in our review, related topics like AD and AChEIs are highlighted. Also, the latest work related to AChEIs is compiled. In recent research studies, novel natural and synthetic AChEIs, used for AD, are quite noteworthy. These studies can be very promising in detecting potent drugs against AD. 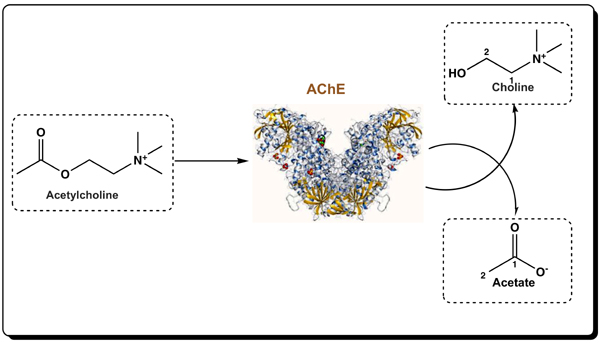