The Roles of Flavonols/Flavonoids in Neurodegeneration and Neuroinflammation


The inflammatory process in the human body is a physiological response involving many cellular types and mediators. It results in scar formation to separate the damaged area from the surrounding healthy tissue. Because of increased blood-brain barrier permeability following inflammation, leukocytes infiltrate the CNS and are also supplemented by proinflammatory mediators. However, an acute inflammatory process after cerebral trauma or stroke may also result in a prolonged lesion formation, leading to a severe neuronal loss. The prolonged inflammatory process in the CNS may cause serious damage to the neuronal system. It may lead to CNS damage in such a way that endangers functional integration and proinflammatory system balance. Effects of different flavonoid species on ischemia-reperfusion injury and cognition and function have also been shown in experimental studies. Flavonoids are presented broadly in plants and diets. They are believed to have various bioactive effects including anti-viral, anti-inflammatory, cardioprotective, anti-diabetic, anti-cancer, anti-aging, etc. Quercetine is the predominant dietary flavonoid. Main sources are tea, onion, and apple. It is demonstrated that the frequently consumed food like soybean, peanut, mustard, rice, sesame, olive, potatoes, onion, and oats contain flavonoids. Catechin and its derivates which are isolated from tea leaves have antioxidant activity but in low doses, their prooxidant effects are also reported. Ipriflavone which is a synthetic flavonoid may increase total calcium in bone. In this review, the effects of flavonoids species on the inflammatory process in the neurodegenerative process were examined as general. 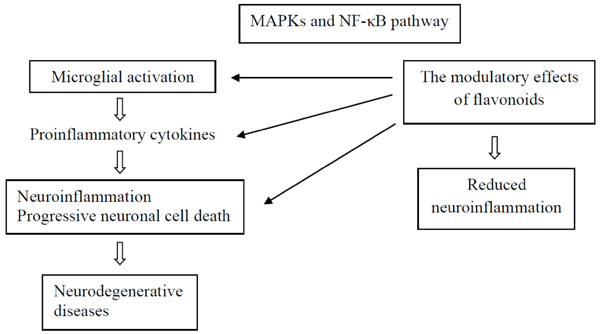